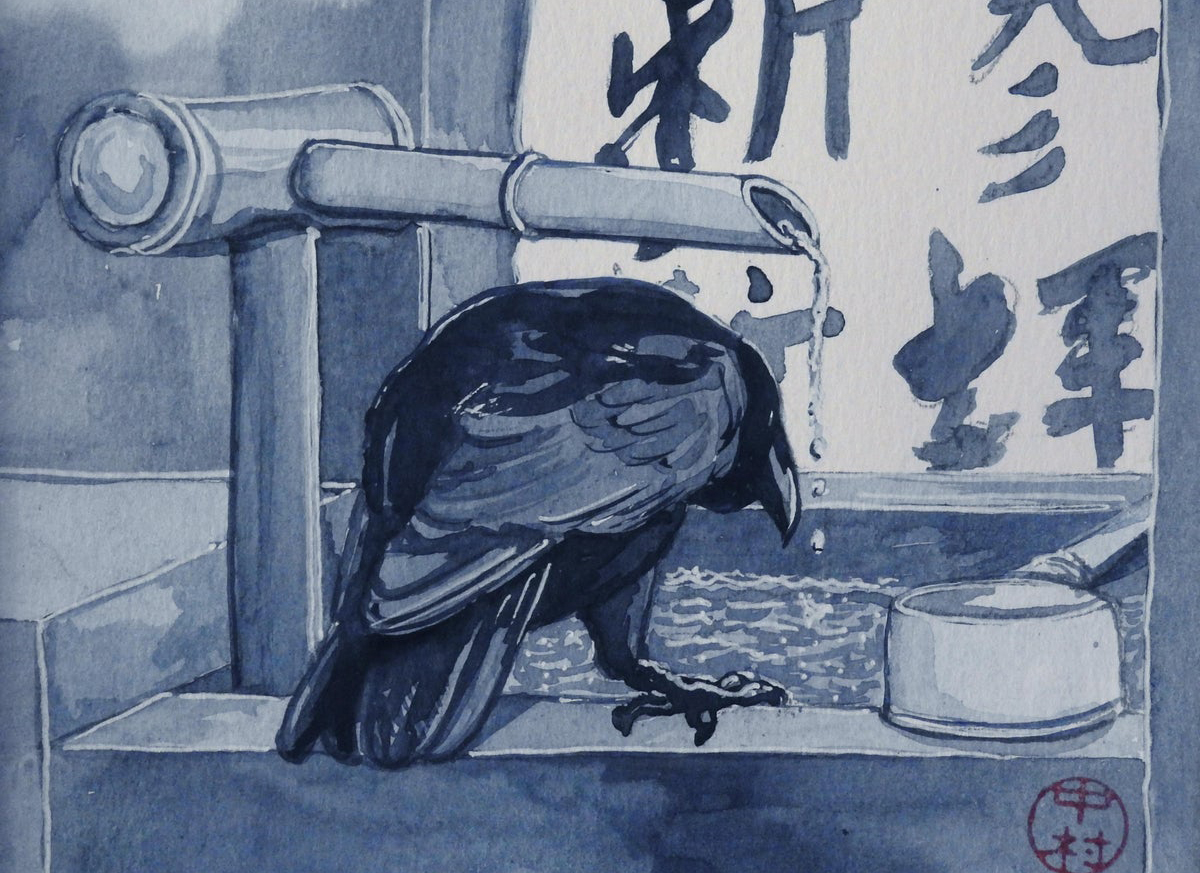 Crow at Water Basin by Nakamura

Steve Brammell currently lives in Indianapolis and works in the wine business. His poems have been published in The RavensPerch Magazine, Alabama Magazine, Northwest Indiana Literary Journal, Birmingham Magazine,Tiny Seed Literary Journal, and the White Wall Review, as well as a forthcoming poems in Flying Island Journal and The Write Launch.

Already the sun
hangs on a little longer,
yolk caught in the white

The light slipping between
the tree limbs while you sleep
is eight minutes younger than the sun.
Who do your lips belong to now?

Mary Herrington-Perry‘s work has appeared in The Florida Review and the Year’s Best Fantasy, among other publications, and a collection of my poems is forthcoming from The Heartland Review Press. She is also a master naturalist who raises bees, organic fruits and vegetables, and native forbs and grasses on the Perry Farm.

Caleb Morehouse is a poet and writer from Burlington, Vermont. He is a sophomore at Clark University. Caleb has been published in Poets’ Choice “Tanka and Kenning,” as well as their book “It is Epic.” Caleb often finds his style morphing to better fit his circumstances; these particular poems were written during a time of recovery from a mental health crisis. Having emerged from said crisis, Caleb wants the reader to know that they are loved no matter who they are.

This is where we live:
In the black-holed-orange-hue
Like iridescence

Slumber sovereignty
And make your patterns humane
A poison sumac

Lush like broken bones
Interior monologue:
No one is native

Perforate the dawn
And send my warmest regards
A recessive trait

Sear the horizon
And silently sift the ash
Visceral, cogent

Tim Russow earned a B.A. in English from Boise State University. His poetry was published in the BSU English Department’s online newsletter Wit’s End, The Cabin Literary Center’s “Writers in the Attic: Nerve” 2014 book release, the online journal Military Experience and the Arts: Blue Streak, A Journal of Military Poetry, Vol. 2 and As You Were Vol. 10.

Pushing a full cart,
Her possessions were basic.
The rain washed her face.

Millie Sparks is a former librarian who has had her fiction published three times in local journals to Eastern North Carolina: The Reedy Branch Review (a publication put out by members of the English Department at Pitt Community College), The Rebel ( a student publication at East Carolina University) and a Christmas anthology put out by The Pamlico Writers Group of Washington, NC.

green house snakeskin
shingle & thatch
so hard to get in—

this itch to slither
pith of stars,
slung like a sling-
shot from the cosmos

Pamela Gemme is a poet, political activist, and and the art editor of the forthcoming Essential Voices Anthology Borderless Books WVU. She lives in Boston Massachusetts. Recent or forthcoming publications include The American Journal of Poetry, Haiku Journal, The Chicago Quarterly Review, Heliotrope Anthology, J Journal, Eclipse Literary Journal, The Ghazal Page and many others.