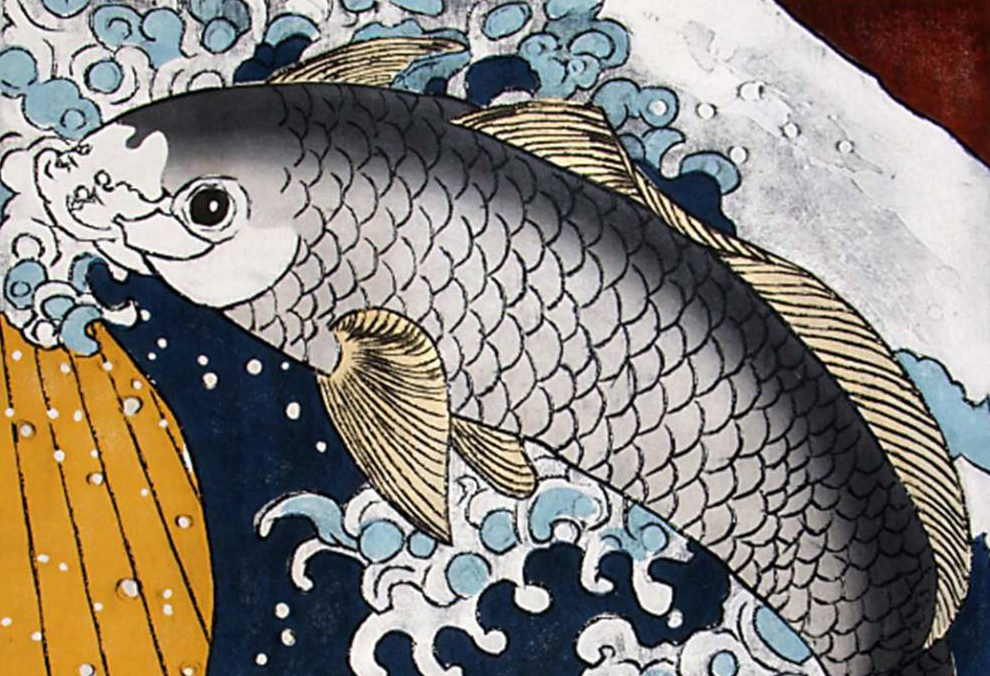 The Happy Carp by Nana Shiomi

Outside the studio,
two birds skirmish over the smallest palm;
the other palms sit empty.

Anhinga chortles, grasshopper chomps, gator bellows—
once you start to listen,
everyone has something to say.

In the chain link fence at the taco stand,
a plastic bag mimics the anhinga,
dries its wings in the afternoon wind.

A vulture’s carcass has lost the war
with a mower’s blade. Don’t feel bad—
he was already dead, eye plucked from ruby head.

A red-shouldered hawk alights in my yard.
Only a few days left—not enough time
to learn the name of every bird.

A mud dauber has trapped herself
in my screened porch. Neither of us
is happy about the situation.

I crush a beetle in half with my knife.
What’s one more death
inside this killing machine?


Anne Jennings Paris is a writer, a visual artist, and a mother. She has lived in the Portland, Oregon area for the past 15 years, and she is native of Gainesville, Florida. Her recent work looks at the human and non-human ecology of threatened landscapes and watersheds.

Nothing gets cleaned from

itself – the thirsty mud drinks

the petals of rain.


Wind growls through the leaves;

In the crying mist.

in my shoulders, whipping me


Walls are shaking my hand-

There’s no voice to haunt them,

Put out the candle.


Roxana Popuescu is a Romanian writer, who has recently started to express herself in English as well.

Melampodium
deeper yellow than paint on
our rickety shed


Oh, poison ivy,
not again! Leaves of three, bah!
Like grief, it sneaks in.


Chicory, a weed
I yank out, toss. Shallow roots,
a map of summer.


Lightning aims for a
tree, our tall pines call. Sidetracked
by a lightning rod.


Belle of Barmera
dahlia, some people can wear
pink. You’re one of them.


A poppy as tall
as me–how embarrassing
that my head won’t bloom!


Someone told me if
I read poetry I’ll die.
I did. Happily.


a lily up close
to the road, sound of engines,
skids, and slammed windows

Dennis Maulsby is a retired bank president living in Ames, Iowa. His poems and short stories have appeared in The North American Review, Passager, The Hawai’i Pacific Re-view, The Briarcliff Review, and on National Public Radio’s Themes & Variations. His Vietnam War poetry book, Remembering Willie, won silver medal book awards from two national veterans’ organizations. His second book of poetry, Frissons, a collection of haiku and senryu was published in 2012. Some of the poems in this book have been set to classical music and may be heard at his website: www.dennismaulsby.com.  Prolific Press released a third book of poetry, Near Death/Near Life, in 2015. The book has since received a gold medal award from the Military Writers Society of America, was named a winner-finalist in the USA Book News contest, and nominated for the da Vinci Eye Award for cover art.  His latest book of linked short stories, Free Fire Zone, was released by Prolific Press in November 2016. It has been named a finalist in the International Book Awards contest in the Science Fiction category. The book has been reviewed by the Military writers Society of America and is being considered for an award by that organization. Maulsby is a past president (2012 – 2014) of the Iowa Poetry Association


a toast to
New Year’s resolutions:
the full wolf

a house finch
pecks at the empty feeder
winter harvest


on the darkest day
we laid her to rest–
winter solstice


Christine Taylor, an English teacher and librarian at a local independent school, resides in her hometown Plainfield, New Jersey. Her work appears and is forthcoming in Modern Haiku, Presence, and Shamrock Haiku Journal. She can be found at www.christinetayloronline.com