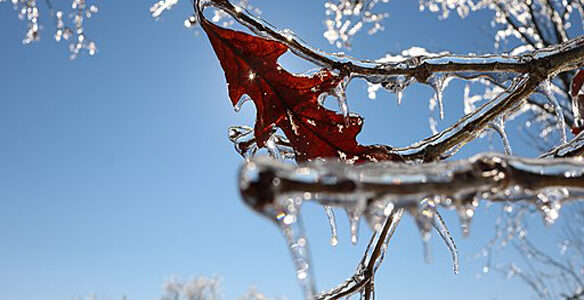 on January 11 | in Poetry | by admininfin8 | with No Comments

Winter’s darkening hour, shroud
slipped over the leaf-strewn grass
we once called backyard and patio
where we sat under stars, wine
in hand, warmed ourselves around
a well-fueled fire pit so summer’s late
evening breeze wouldn’t chill us.

January dark comes early behind
the last planted evergreens, where wild
woods tumble into the ravine, climb
out, walk their way up the steep slope
that brooks a distant view. Gray-brown
trunks like footsteps rising from the tangle, and
strewn limbs slice a New Year’s steely sky.

They say a storm is coming
up the coast, first of a worried new year.
Landmarks in our yard, soon to be shrouded
in mounds of fresh snowfall—inkberry, holly, yews—
their edges blurred. While winds howl
at laden tree limbs, test their strength and bend them toward
sagging power lines. We could be spared this time,

high and dry, a whole-house generator to keep us
warm if we need it. Still I can’t help but imagine:
the seaside just a mile away, awash in the next storm-surge, where
flooded living rooms stand on their stilts. Or the Interstate, where
drivers sit blinded in whiteout, unsure if they’ll arrive
wherever they’re headed tonight. I wonder who’s next,
no matter the warnings, helpless against the mockery.
Sated for plucking from his comfortable illusions, all
for no good reason. Just the way the seasons roll.

AG Compaine is a psychiatrist and a psychotherapist whose work focuses on long term psychotherapy with adults who have childhood histories of abuse/trauma. He and his husband are in the first generation of gay men to raise of child of their own together, and she has started college this past September. Although AG has been writing poetry for several decades, he just began to send out his work for publication in September 2021. His first poem was a long (7-part) poem that appeared in the December ’21 edition of Willows Wept Review. Since then, he has had several other poems accepted, and they will be coming out this Spring ’22 in Euphony Journal, The Tusculum Review, and Willows Wept Review.