» Poetry » Things Stuck in Other Things Where They...

on January 4 | in Poetry | by admininfin8 | with No Comments

My mother one afternoon in a cowboy hat, sitting on a Texan bench of hay.
Me in the same configuration of time, space, & cowboy hat.
The memory in my brain like a boulder in a haystack, like a bad joke.
The sun in our faces.
The year we spent in Fort Worth, Texas, our first year in America.
The fluent Not-English I spoke in kindergarten.
The blond boy from Germany in the same sandbox with me, laughing at my jokes.
His name, Eammon, pronounced like Amen, unlike any Chinese
or American name I’d ever heard, a funny humming
in my ears.
The soy sauce + Tabasco sauce + mud in my “soups.”
The exact same ingredients + sugar in my “pies.”
Me in the biggest kitchen I’d ever seen, running around the “island,”
chased by an elderly white man my father said to call
my “Texas grandpa.”
My father with his full head of black hair & British-inflected English
in the graduate religion program at Texas Christian University.
The grease-tang of kung pao chicken in my mother’s clothes,
always in my mother’s clothes, after long shifts at a dimly lit Chinese restaurant.
The hyper-sweet of strawberry candies
in my mouth—the best treat my mother would let me thieve from the buffet bar.
The Legos & little plastic trucks filling a metal barrel of caramel popcorn
my mother received as a Christmas gift, & after the popcorn was finished,
emptied out.
The Bengal tigers in the tightly fenced forest habitat in the zoo Eammon & I visited.
The sand from the sandbox in Eammon’s shoes, in mine.
The sun in our faces
as we sweated over castle construction & fortification, all afternoon.
The goodbye I placed in Eammon’s ear.
The motels & motels my parents & I found ourselves in, moving, leaving Texas
for Massachusetts, because my father was promised a scholarship.
The persistent idea in my head that a scholarship was an actual ship
& we’d soon board it & get to Massachusetts,
which was surely an island,
close to Iceland.
The Christmas card from Eammon, once cherished, now stuffed
in a box, some closet, along with my promise to write back.
The torn-out magazine grin of a young Ewan McGregor,
hidden between the 9th grade pages
of The Catcher in the Rye.
Then in pivotal 10th grade, the incident
of an accidental strand of my mother’s black hair
appearing between the golden pieces of fried tofu
in a dish we were serving to our French exchange student, Nicolas.
Nicolas, who was cute
but aggressively straight, & who three weeks into the experience
had begun to call everything in this foreign country
(except its college-aged women studying French)
almost unbearably “moche”—“ugly.”
& some time during this lively cultural sharing, I learned the French word
for “scar”—saw it over & over
in the French edition of the first Harry Potter book,
which Nicolas had given me when I stayed with him in Paris, & which
reminded me of the small bald spot
on the left hemisphere of my head
which I received one afternoon in Texas, when I was the skinniest,
sincerest Superman
& flew into the kitchen
where my mother was removing from the stove
(because she didn’t know she didn’t have to boil the milk anymore)
a saucepan of milk, still boiling
& we bumped into each other—“cicatrice.” 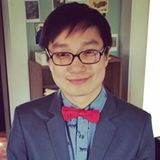 Chen Chen is the author of the chapbooks, Set the Garden on Fire (Porkbelly Press, 2015) and Kissing the Sphinx (Two of Cups Press, 2016). A Kundiman Fellow, his poems have appeared/are forthcoming in Poetry, Narrative, Drunken Boat, Ostrich Review, The Best American Poetry 2015, among others. He holds an MFA from Syracuse University and is currently a PhD candidate in English & Creative Writing at Texas Tech University. Visit him at chenchenwrites.com.