on January 16 | in Poetry | by admininfin8 | with No Comments

In the courtyard of a temple where an ancient tree blooms

an old woman is waiting to greet you.

She locks her fingers. You step into her hands.

Lengthen your body. Your feet on her shoulders.

Another woman (not much younger than you) climbs

over your bodies, plants her toes on your shoulders,

for the next woman, younger, skinnier, growing hips.

She helps the younger children board the human rope,

almost toppling, if not for the old woman at the base,

Up in the leaves. And the two-year-old, just learning to walk,

dangles in the middle cluster of teens, who offer their long arms

and cupped hands. Because the two-year-old is carrying

the baby just born. The others tell her not to cry

while she presses her face to the baby’s cheeks.

Go up the six-year-old says. Up here! says the five-year-old.

The toddler above plops the thumb out of her mouth,

offering her hand, another presses her sweaty palms to the bark,

reaches for a branch. But the old woman trembles at the base,

and breathing heavily, drops to her knees. The tower collapses,

your foot stuck under roots growing through the stone floor.

All the girls fall—some even cling to the boughs—but the baby.

Somehow the baby found a nest on a branch.

Later, when the old woman begins to disappear, you tell her

you saw the tree lower its branch,

to catch the falling cry.

We decided to ask for our money back,
we women of color.
So we wrote a formal letter to the league of straight white men.

I can’t remember exactly what we said
but it was like filing a complaint to the manager
about some sandwich we ate,
the poor quality of a show
we had anticipated seeing for months
only to be disappointed. But it was something
more serious, like collateral.

I half-expected the straight white men to ignore our request,
if not take a whole year to reply,
or perhaps never get our letter in the mail
or even better, lose it
—denying having ever received it.

The straight white men wrote back immediately,
though it wasn’t the main person we addressed, who wrote back.
It was his roommate or some friend sleeping on their couch
whom they lazily assigned this task.
Wasting no time, they gave us a Visa gift card of $5 from Target,
to reimburse us for the damage done.
And their letter was way more formal than ours,
with the proper, stuffy language
and copyrights of things I didn’t even know we were talking about,
their words full of legal accuracy and politeness.

What’s more is that they made the mistake of calling us
“Women of Color, Inc.” as though we were an organization.
But this was unnecessary
because we didn’t call ourselves that. 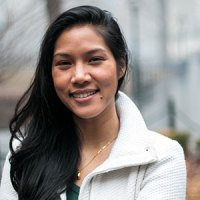 Monica Sok is a 2016-2018 Stadler Fellow at Bucknell University. She has received honors from the National Endowment for the Arts, Kundiman, the MacDowell Colony, Saltonstall Foundation, Hedgebrook, the Elizabeth George Foundation, the Jerome Foundation, and elsewhere. Her chapbook Year Zero was selected by Marilyn Chin for a Poetry Society of America Chapbook Fellowship. Her poems appear or are forthcoming in the Kenyon Review, Virginia Quarterly Review, Narrative, and the New Republic, among others. She holds an MFA in Creative Writing from New York University. She is from Lancaster, Pennsylvania.

« If Life Is As Short As Our Ancestors Insist It Is, Why Isn’t Everything I Want Already At My Feet & Poem – Hanif Willis-Abdurraqib The Man Who Paints Time – Claudia Serea »