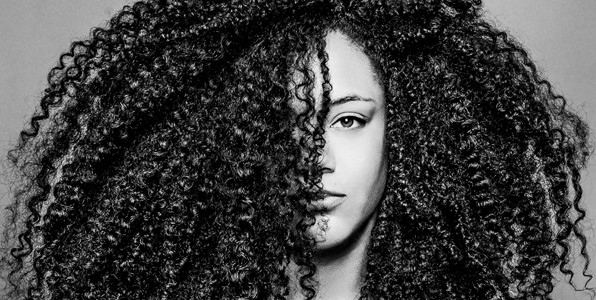 » Creative Nonfiction & Memoir » This Is What it Means To Say...

This Is What it Means To Say “Black Hair” – Mercedes Lucero

In third grade, I sat at a blue metal table outside on the blacktop. An older boy at the next table over said to me, “Your hair looks greasy.”

I don’t even remember his name, but I remember he was a white kid.

“Is it because your name is Mercedes?” he asked me, “Do you have to grease up the way you grease up a car?”

I am bi-racial and my Spanish mother has thick flowing hair. When I was younger, I always wondered why mine never looked like hers. Even black celebrities had hair that looked “white.” All I wanted was for my hair to look like theirs.

Then, as if by a miracle, as if the universe heard me, I came upon relaxer, the magic formula, the “creamy crack,” the stuff that made my hair luscious and flowing, that removed every unwanted kink and curl. I was eight years old.

I remember sitting in my Spanish class with my newly straightened hair, feeling “pretty.” It was a small private Catholic school and I was among three black students who attended there. The girl behind me asked if she could touch my hair. I let her. Then, three other girls came over, because they wanted to touch my hair too. I sat there, surrounded by these white girls touching my hair, feeling noticed, relishing the attention until my Spanish teacher walked in. She saw us, and screamed for the girls to stop.

“This is not a petting zoo,” she said.

“It’s fine with me,” I told her, upset she scattered the girls around me.

It would take me years to understand what she meant by this.

Later, that summer, my mother took me to a salon to put my hair in braids. When I came home, my neighbor, who was my age, said to me, “Now, you look black.” A thirteen year old me stood there realizing that the way I wore my hair could define my race.

In the news that year, I watched as critics claimed that Viola Davis’ natural hair at the premiere of the movie, The Help, was “inappropriate” for the red carpet. It made me angry, but not angry enough to do anything about it.

My mother’s friend called me one day. I had stayed with her for a couple of months when I was three while my mom traveled overseas for work.

“When you were little,” she told me, “I shaved all your hair off.”

About a year ago, I learned about the “Big Chop,” which is exactly what it sounds like. A hairdresser “chops” all of the relaxed, chemically treated hair, leaving nothing but the natural. My first time witnessing this was when one of my coworkers came to work with a puffed out mini afro on her head. She was a girl who wore weaves and wigs and seeing her natural, I remember the rest of us saying things like, “Good for you” and “I could never pull that off.” I knew, secretly, I wasn’t brave enough to do what she had done, to shave her hair down to its root in an effort to get back to the natural curls.

About a year after dating my current boyfriend, I curl my relaxed hair, which comes out, not curly, but wavy. It’s the first time he’s seen my hair when it isn’t straight. I’ve kept it straightened for no other reason than that I simply feelmore attractive when it’s straight. My boyfriend is Caucasian, an Irish and Scottish blend with a head full of bright red hair.

“I love your hair curly,” he says to me and I think, you haven’t even seen curly since this isn’t even my natural curl. No, my natural curl has the kind of kink you can’t stick your fingers through.

“Better than when it’s straight?” I ask him.

“Yes,” he tells me and even goes on to say that he prefers my hair when it’s curly.

Now, I’m just upset with myself. How can this guy, who knows nothing of black hair, nothing of the pressures put on little black girls, love my hair more than I do?

When I go to see my therapist, I ask her, “What should I do?”

This is a real dilemma for me and I’m the kind who needs to be told.

“Do the kind of thing that would make your children proud.”

“I don’t have any children,” I tell her.

Imagine my children? It’s absurd, really, but I start thinking about it. About how I would want them to see me. Imagine your children, she tells me. So I do.

On a Friday evening on the west side of Chicago, I imagined them as I walk into an all black hair salon, the first one I’d been to since I was seven. I imagined them as I waited in the black leather seats, flipping through Traditional Homeand as the hairdresser called my name. I imagined them when she asked me if I was sure and when I told her that yes, I was sure. I imagined them as she wrapped a purple cape around my neck, as she grabbed her shears and lifted up a strand of my long shoulder-length hair. I imagined them when she cut it, all of it, down to only about an inch from my head, when she styled it and turned me around in front of the mirror. Little strands of curls, thick shining curls in tightly wound spirals, stuck up from my head. Beauty was not something I had ever associated with my own natural hair, but sitting there, I felt beautiful and I imagined what that would mean to my children. I smiled, a big goofy smile I couldn’t seem to get rid of, even as I rode the train home. I caught glimpses of my new hair in storefront windows and car door reflections and I smiled.

A few months ago, something really amazing happened to me. As I was walking around downtown Chicago, a homeless black man sat on the corner, shaking a cup in front of the passing people. As I became closer, he did not ask me for change like he had the others. Instead, he simply said, “Thank you.”

I was confused. I stopped. That day I wore my hair behind a headband, in a bunch of curls going this way and that.

He knew. Of course, he knew and I smiled, slipping some money into his cup, telling him eagerly that I had finally decided to chop it off. He listened, nodded his head and just before I left, he said, “It’s so nice to see women with their real hair.”

That’s what he called it, real. My hair. My black hair.

I walked on, through the crowded city streets, knowing what it meant.

Mercedes Lucero is a second year MFA student at Northwestern University and has been published in the Chicago Tribune’s Printers Row Journal, Burner Magazine, Whitefish Review, and Canvas among many others. Her short story “Memories I Cannot Recall” was nominated for a Pushcart Prize.