Self Portrait by Egon Schiele

on December 22 | in Poetry | by admininfin8 | with No Comments

Boys desire to be
desired, too.
Boys move
out of single
parent homes &
into double occupant
condos of unwilling to fix
foundations so they never fill              the vacant rooms.

Boys can also be whores, you know.

Boys use fingers as
tongue depressors when
depressed & hit eject.

Boys look into mirrors
at shapes that aren’t there
& also want not to be there.

Boys become assistants
to magicians willing
to help them
learn
to disappear
& then reappear
each evening withfill            the flick
of an ‘Abra-cadaver’fill              wrist.

All of us have a type:
Schindler’s list thin,
starvation Ghandi thin,
ungodly thin like Paris Hilton
after purging six big macs,
Tom Hanks Philadelphia,
Jared Leto in Dallas gaunt
ribs could play xylophone
like my withhold of protein
led to Ethiopian days of near
fainting on stair masters
after chugging a sugar-free
Red Bull with taurine
(which is actually bile)
scorching eyes as chlorine
crotch touches during first
summer swim, Angelina Jolie
cheekbone thin, won’t even eat
a wafer thin, paper doll thin,
Kate moss thin, chemo treatment
patient thin as pre-Easter Jesus
apocryphal thin
& all these                          idols               fit
on the altar
which we kneel to              nightly
& make our sacrifice. 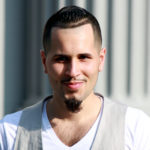 Paul LaTorre is a poet, activist and educator who teaches at Bloomfield College in NJ. Blending pop culture with advocacy for various forms of trauma including abuse, disorder, and mental health issues, his aim is to create dark poems with a sense of levity. Paul’s work has been published in Zeitgeist, Drunk Monkeys, Narrative Northeast, BLINK and has been featured on the DREAM Act’s ‘voices’ portal. His chapbook of poetry, Disappearing Boy, was recently published by the 3 Mile Harbor Press.