AT RISK OF RAIN – Vivian Montgomery

My mother had been saying “I need to get out of here” for several hours.

The night before, she had called out into the darkness from her recliner, that she was lost in the woods and needed help finding her way home. The only time we had been out of the house during my stay was two days earlier to go to the doctor to get more bad news that she couldn’t understand.

It was time, no matter the approaching storm or the fact that she wasn’t able to walk. I called out to my father in his study, my sister in the guest room, that we were going on an outing. I must have sounded so matter-of-fact, as though it presented no challenges, wasn’t subject to question, that they just responded with simple agreement. I got her into the wheel chair, a process that sometimes felt almost like dancing and that could lead on better days to my mother getting a shine in her eye and impishly spitting out “Cha cha cha.” We headed out to the car over the roughly paved path, and then I lugged her out of the wheelchair, pivoted her into the Toyota seat, lifted her legs, and closed the door.  We drove downtown to get her watchband fixed at Mallove’s Jewelers. She had been so worried about the watch, getting it fixed was one of the only concrete items on her mental list.

She sat in the car as I ran in, chose a new band, and waited for the attendant to replace it, all the while glancing out at the car and the slumped figure in the passenger seat. I toured the jewelry cases, remembering the Saturday walks downtown with my pre-pubescent friends, stopping at Mallove’s to look at posts we could buy for our freshly pierced ears. When the watch was ready and I ran back out to the car, the rain was almost impenetrable. Mommy was so glad to be able to put her watch on, although she couldn’t remember which wrist.  We journeyed on; it had just been so much work to get out, and it seemed to be doing her some good.

She had a urinary tract infection and it added restlessness to her disorientation and to the violent tremor in her arm.  But she was taking it all in, the trees waving in the wind, the people walking with umbrellas pressed up against them, and she wanted to keep going as we got to a point where we could have turned home. I headed toward a little mountain road on Middletown’s outskirts, and the Toyota’s tires started to grind over wet gravel.  The rain was torrential and I’m certain, had we been listening to the radio, we would have heard warnings of flash floods. The road was washing out from underneath us, a chunk of it was falling away down the steep slope as we struggled upward. I swore and gasped, Mommy laughed, and we rounded the bend at the crest of the hill, clearing the danger, hearing the crunching and slushing behind us. We looked at one another with amusement but it seemed we also shared a heroic feeling of having done something. She said, “I’ve never felt so much agony and so much of a thrill at the same time.”  I had forgotten about her bladder pain. “Do you want to go home?” I asked, and she replied, “Oh NO, NEVER.”

We climbed another small hill, still with rain pouring down, but the road was paved so there was no more rush of the surface washing away beneath us. Down, then up, and she said “It’s occurred to me that Daddy will want to marry someone else when I die, someone who moves quickly and who’s fun. I once got sad when I watched him and Jocelyn walking up ahead of me in New York – she was able to keep up with him, and I thought he’d be happier with her.”

I made some feeble efforts to reassure her, saying that being well-matched in walking style was a far cry from wanting to live with that person.  She shrugged, “Oh, I know, I know.” We said no more because the sun started shining through the trees, and we were driving along a stretch of road that was lined with brilliant red maples. She said, “This’ll be the last of them, the leaves will all be washed away.” I pulled the car over and we stared at the color as though it would be gone in less than a minute.

The rain started again, and she was anxious. We were just a few minutes from home, but our arrival there felt like a return from somewhere very far away. I couldn’t get her out of the car, we were both getting soaked, and she said, “I should just stay out here.” I went in and got my sister, who couldn’t believe I had taken her out, and it wasn’t the time to tell her how much had happened and how I was sure it would make things better. I just let her take charge of moving Mommy’s legs, hauling her seemingly dead weight into the wheelchair, while I covered her as best I could with a raincoat. We were dripping when we got inside, but her face was bright as I toweled her off, and she said, “That was the most exciting thing that’s ever happened to me.” Daddy and Jennifer stared silently at us as we told them where we had been – maybe they thought we were making too much out of a small adventure, or maybe they could see we were washed clean, filled with a sense of having done what we set out to do.

The next day was my husband’s birthday, so I left early to drive the two hours home from Connecticut to Boston to take him to lunch before returning to my parents’ house.  The leaves had, indeed, been washed and blown away, so the fall color seemed like a vague reference to something else. I was aware of how briskly we walked on our way to the neighborhood seafood joint, how I kept up with him under the cloudless sky, how nothing hurt but there wasn’t much to say. 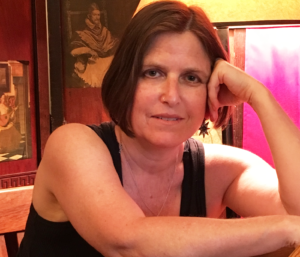 Vivian Montgomery is a Boston-based harpsichordist and accordionist who writes. Her work centers around music, historical excavation of long-buried women composers, her mother, and unlikely Judaism. Her personal essays have been published in the Boston Globe Magazine, Bluestem, Ligeia, Adanna, Jabberwock, Chautaqua Review, and in the anthology Mother Reader by Seven Stories Press. Her personal essay “Immersion” received a Writers Digest Prize for Spiritual Writing, and was a finalist for New Letters’ Conger Beasley Jr. Award for Nonfiction. She is a brooding walker and mother, feeling her way with the help of words spilled onto the page. She is also on the faculty of the Longy School of Music, leads the Klezmer band Shir Chutzpa, and has been a Resident Scholar at the Brandeis Women’s Studies Research Center for 14 years.