on November 26 | in Poetry | by admininfin8 | with No Comments

She told the three Russian soldiers
she would gather snails that day,
and she picks their brown and white shells
from the dew-drenched land,
and in her satchel she had three,
and Mutti said to try to find a dozen,
to feed her and her sister and the three soldiers
who track mud in their home, setting Mutti’s face
into grim lines.

The gentian is in bloom,
deep blue petals curling, surrounding yellow stamen
like a fallen sun,
like the hole inside of her
where her older brother and father disappeared,
hole like the caves where the ibex live
high near tundra, young ones with velvet horns
soft like her before the war,
the hunger and the blood that came now
every month and the soldiers with their laundry
and tobacco and vodka and thirsty eyes.

She comes to a meadow with a snow gum
surviving from a fire,
its new sprouts reaching from the blackened old trunk
like a womb, bulbous.
She thinks how out of every death sprouts an insistence
to live, despite the ashes, despite the eaten valley,
and she thinks of a day when maybe she will stretch herself
like Alpine tundra’s five petals—
her brother with his mucous breath,
her Vati of yellow nicotine hands,
her Mutti of yellow yarn for socks
her breasts aching like sunset when the moon bulges,
her sister the petal that finishes the cross with the hungry body,
and all the petals
will drink in the sun as if never losing it,
never burying itself in the winter frost.

She lived in a makeshift camp
in front of Vienna’s ruined Bahnhof.
Her feet were bare, and the filth on her skin
itched as she wiped the lice descending into her eyes
from her dirty, dark bows.
Her brother hopped around the American canteen clapping,
and the soldier threw him half of his sandwich,
but the older boy Hans wrestled with him
and took it way.

Yesterday was a better day.
A soldier threw her two cigarettes,
and she bartered them for two apples,
one for her and one for her brother.

At night she sometimes dreamed of her mother,
dead from an air raid in Essen,
her mother kneading the potato dough to make Knoedel,
her mother polishing their black shoes,
darning their socks.
Of Vati she remembered little.
He disappeared in Russia and never came back.
She remembered his shoulders were broad and strong
like a castle’s stone.

In one dream her mother was a small bird
perched on the rubble.
Her hair was crow-black,
she had no wings, just a coat of feathers,
and she sang to her daughter the lullaby
about the moon emerging blurred from the clouds
and the stars coming out,
and when the daughter awoke,
it was the middle of the night
and the soldiers were drinking
on the broken steps of the station,
speaking in a language she couldn’t understand,
and she could see the moon.

It was a sickle,
like a scythe threshing the sky for a song. 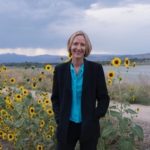 Kika Dorsey is a poet, educator, writing coach and tutor in Boulder, Colorado. While finishing her Ph.D. in Comparative Literature in Seattle, Washington, she performed her poetry with musicians and artists and wrote about German and Italian modern and postmodern writers. Her poems have been published in The Denver Quarterly, KYSO Flash, The Comstock Review, Narrative Northeast, The Columbia Review, among numerous other journals and books. Her chapbook, Beside Herself , was published by Flutter Press in 2010. Her full-length collection, Rust, came out with Word Tech Editions in 2016. Her forthcoming book, Coming Up For Air, comes out in 2018. She is an adjunct instructor of English at Front Range Community College and has tutored in their writing center since 2008. She is also the poetry editor of Plains Paradox.