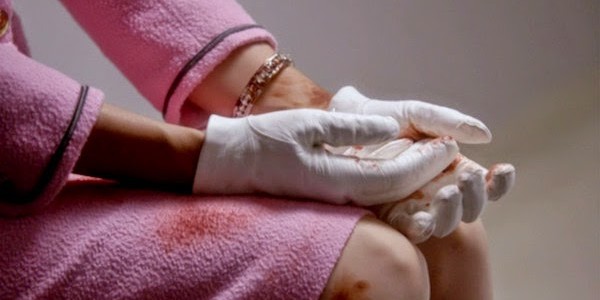 The Pink Suit Writes a Letter to Jackie — Bryanna Lee

on January 2 | in Poetry | by admininfin8 | with No Comments

You should have left the blood on,
let the red ferment my Chanel like a beaujolais:
new, light-bodied, and acidic.
Imagine their faces!
A small stem like you cupping to catch
his brains as they poured from the car.

in that lull and let the calm of his flesh
break the horror from yours like that first night.
Instead, you let them wipe your face.
Instead, they brushed the last of him from your hair.
You should have left him there.

A bit of brain could be all the rage—
“Add an Extra Bop to Your Bob”
splashing across the magazine page. Why not?
They’re telling boys blood is beautiful
through Playboys and draft cards,

dealing out guns like toys,
saying it will make them free.
They didn’t tell that to us.
They picked him from your hair like lice
and called it history.

Now the rock stars are crooning
and an airplane’s catcall
is whistling across the Pacific.
They told you we were too horrific—
said you couldn’t take it.
But when it’s my turn,
I’ll dip your brush in his blood
and paint the nation hush-red.


Bryanna Lee is a writer and editor in the Tri-State Area. Originally from Minnesota, she earned an MFA in poetry from Rutgers-Newark, where she currently teaches English composition and writing workshops. She was the 2012-2013 Joseph F. McCrincle online editorial fellow for Poets & Writers, and her work can be found in Selfies in Ink.