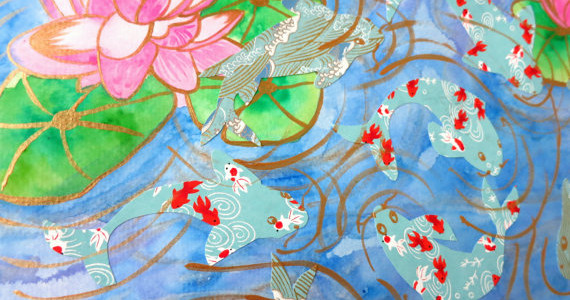 North: after the storm, all dust hung up

in the crowded air, with his human face

frozen into a dot of dust

and a rising speckle of dust

melted into his face

to avoid this cold climate

of his antarctic dream

he relocated his naked soul

at the dawn of summer

South: like a raindrop on a small lotus leaf

unable to find the spot

to settle itself down

in an early autumn shower

my little canoe drifts around

beyond the bare bay

Center: deep from the thick forest

from ring to ring within each tree

dies off into the closet

of a noisy human mind

West: not unlike a giddy goat

wandering among the ruins

of a long lost civilization

you keep searching in the central park

a way out of the tall weeds

into a mummy blue

East: in her beehive-like room

so small that a yawning stretch

she draws a picture on the wall

of a tremendous tree that keeps growing

until it shoots up

from the cemented roof

Yuan Changming, 8-time Pushcart nominee and author of 5 chapbooks (including Kinship [2015] and The Origin of Letters [2015]), is the most widely published poetry author who speaks Chinese but writes in English. Growing up in a remote village, Yuan began to learn the English alphabet at 19 and published monographs on translation before moving to Canada. With a PhD in English, Yuan currently co-edits Poetry Pacific with Allen Qing Yuan in Vancouver and, since mid-2005, has had poetry appearing in 1049 literary journals/anthologies across 34 countries, including Best Canadian Poetry (2009,12,14), BestNewPoemsOnline, Cincinnati Review and Threepenny Review.