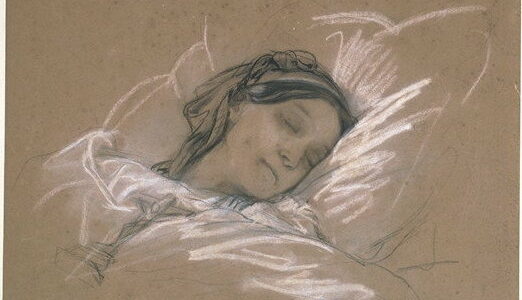 Women on Her Deathbed by Octavio Tassaert

HER BODY, MINE – Naomi Coquillon

The funeral home was in an old farmhouse that had become an island within Northern Virginia’s ever-growing exurbs. When I saw it, I knew Mom would have loved it, which mattered to me somehow.

One of us was required to identify her body there. I don’t know why we didn’t have to do this at her home or at the morgue, but I suppose it was because she had laid all of her identification out for the police.

I couldn’t bear to see her body. I thought she might look as if she were asleep, but I knew whatever they did make her look even less like herself—Mom never wore make-up. My fiancé offered to identify her for me.

“She looked fine,” he said. “They tied a scarf around her neck to cover the bruising. It was peaceful.” I tried to make this make me feel peaceful too. It didn’t.

The next day, my sister and I sat on the wraparound porch of the funeral home, waiting for Mom’s ashes. As we looked out into the sunshine, I blinked and saw Mom there in the space between us. Her stocky legs were crossed at the knee, her pointy knee cap sticking up from below her shorts. She had a smile on her face. “Isn’t this a beautiful view? What a sunny day!” she said. “I’m so glad I get to be here with you.” I knew then what it means to be haunted, a trick not of light but of memory.

She was there especially at my grandparents’ summer cottage, which she had loved. I would turn the corner into the kitchen and have a vision of her bending over the dishes, then looking up and out over the sea as she loved to do. If she was not in the house, it was not because she had died, it was because she had gone down the path to the beach to put her feet in the sand and to give thanks to “Earth, sea, sun, and sky,” as she liked to do, or had walked into town to mail a postcard.

I should have done the identification. I knew her body almost as well as I know my own. I know her stretch marks, the soft shape of a belly that never recovered from holding twins. The smooth skin of her face, pale and unblemished. The tip of her narrow nose. Her thin lips that would break into a wide smile, bright and open. I can see her hands so clearly. Although she was never concerned with fashion, her fingernails were always long and elegant. She tended to them herself, softening the cuticles and filing and soaking them until they were beautiful and strong. I remember snuggling next to her and putting my arm around hers, pulling on her hands and examining them without asking, without question. When we arrived at the cemetery, I wanted to lay on the grave and put my head on her stone the way I used to put my head on her shoulder.

When my mother died, I felt as though something had been removed from my body, as if she were now a phantom limb, an extension of myself that felt present even when it was gone. Now, ten years later, she returns to me. When I look down at my body at forty and after bearing two children, I see my mother’s form. 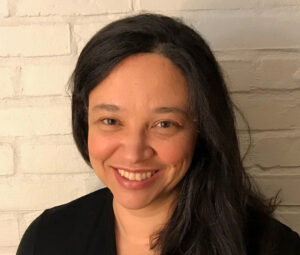 Naomi Coquillon is a working mother (and occasional writer) living in Maryland. She works in the field of museum education; she is currently the Chief of Informal Learning at the Library of Congress. Her published writing to date is focused on my profession and includes articles in the Journal of Museum Education, Social Studies and the Young Learner, and Museum Magazine. An excerpt of her memoir that explores her biracial identity will be published in The Nasiona Magazine this year.